If you’ve spent any time around my blog you know that I am a big fan of basketball. I was enthralled with it in my younger days and even played a year in college. March Madness is a very exciting time for many basketball fans like myself across the country. It’s the time of the year where 64 of the nation’s top teams duke it out on the hardwood for the rights to be called NCAA National Champions.

It’s an emotional and exciting ride for players and fans alike as illustrated in the popular “One Shining Moment Videos” that release after the championship game each year.

With no surprise there are marketers willing and ready to take advantage of this exciting time of the year for sports fans. Enter Quicken Loans and Yahoo.

Quicken Loans has partnered with Yahoo to give away one billion dollars! The $1B with insurance by Warren Buffet’s company Berkshire Hathaway. The billion dollars goes to the person who successfully fills out a perfect bracket.

Now, before you get super excited by the well orchestrated campaign designed to entice you to throw your ball in the court for this opportunity let me slap some logic into you.

There will be a lot of losers. And…a lot of leads!

Have you looked at the entry form? 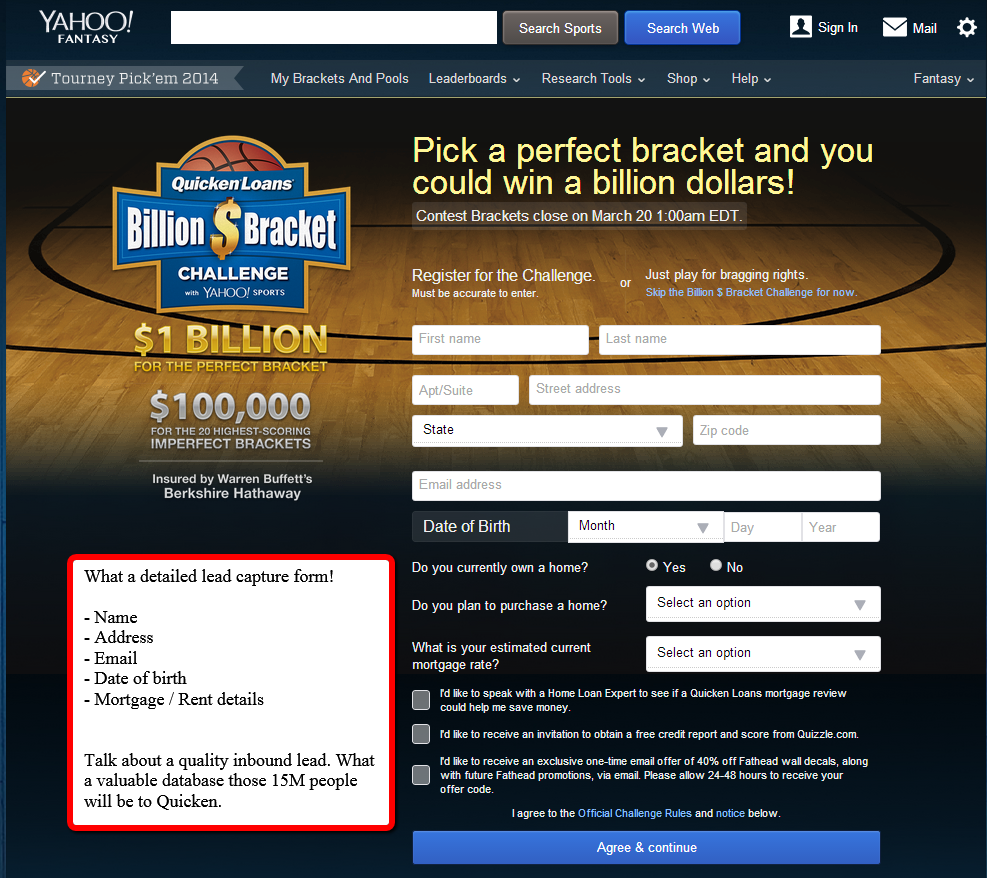 By doing some quick research I’ve found several websites that sell mortgage leads. eLeadz.com sells their new mortgage leads for $15/lead, but we all know they are far more valuable to an actual loan originator like Quicken. They can also use this massive lead list to market other related products and monetize even further through sending affiliate offers that they will receive commission on.

I must admit that I was enticed to sign up for the billion dollar bracket challenge when I saw the commercial on TV. I searched and went to the landing page and upon reviewing the form immediately changed my mind.

With a 1 in 9 quintillion chance to win the bracket challenge I can’t justify releasing that much of my personal information.

Let’s take a look at other things that are more likely to happen than winning the bracket challenge….

So according to the lightening odds published by NBC, gathered from the National Safety Council, you’re more likely to be hit by lightening 68 billion times before you win the Bracket Challenge.

I’ll still likely fill out a NCAA tournament bracket, but will not be participating in the Billion dollar challenge.

I’m sure I’ll be kicking myself if I get a perfect bracket!!!