If you’ve been hanging around my blog for a while, or have gotten to know me for any length of time I’m sure that you’re aware that basketball was a big part of my life growing up.  I worked extremely hard and was known as the first one to the gym and the last to leave. This dedication led me to be recognized as a “Fab five player” in my local area in high school. After high school I played in prep school for a year in Connecticut and ended up playing basketball at California University of Pa (D2 school) before transferring to the University of Central Florida to focus on business.  Throughout my athletic experiences I learned many lessons from basketball that I still apply to business today.  As with many young basketball players, one of my role models growing up was Michael Jordan.

Michael Jordan had a burning passion for winning, which drove and motivated him to see his dreams into existence. Throughout his NBA career he amassed an incredible amount of success:

The success above doesn’t even include his substantial endorsement deals, products and movies he was a part of.

One quote that always stuck with me that Michael Jordan mentioned was the following:

I’ve missed more than 9000 shots in my career. I’ve lost almost 300 games. 26 times, I’ve been trusted to take the game winning shot and missed. I’ve failed over and over and over again in my life. And that is why I succeed.

When most people think of Michael Jordan what comes to mind is all of the success that he experienced. However Michael experienced many failures along the way including those mentioned above and being cut from his high school team. Success is rarely a straight line process. In the words of Michael Jordan…

If you’re trying to achieve, there will be roadblocks. I’ve had them; everybody has had them. But obstacles don’t have to stop you. If you run into a wall, don’t turn around and give up. Figure out how to climb it, go through it, or work around it.

Michael wasn’t discouraged by his failures, but motivated by them. This motivation translated into fuel, which empowered Michael Jordan to reach vast levels of success. By living out his dreams and achieving so much personal success he was also able to inspire others to do the same. 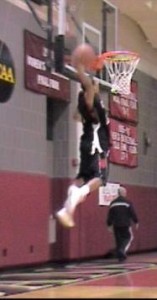 Many people, both young and old, dreamed of how great it would be to hit that game winning shot, or soar through the air and throw down a thunderous dunk like Mike. Myself being one of them.

Even though I could never soar and dunk like Mike…I was eventually able to dunk! Don’t believe me…I have proof! Here is a pic of me dunking in college seven years ago that I call “I believe I can fly” (MJ inspired…lol).

For a short period of time I could even do some pretty cool dunks (alley oops to myself, 360, one foot, two foot, etc), but those days are behind me. Nevertheless, I learned a great deal from watching Michael Jordan. His determination, focus and passion inspired me and therefore contributed to me becoming the person I am today and for that reason I’m thankful.

Happy Birthday Michael…thanks for being an inspiration to me and millions around the World.