The UCF LaunchPad always seems to have something cookin! Yesterday I was on campus for a lunch meeting and happened to walk through the Student Union. I decided to stop by the UCF LaunchPad, a center championing entrepreneurship on campus, to say hello and am glad I did.

I was informed that John Rivers, the founder of 4 Rivers Smokehouse (AKA – The best BBQ you will ever eat!!!), was speaking in a few minutes. I decided to attend.

John Rivers is quite a remarkable man. He has a strong presence, yet is very approachable and down to earth. He communicates very well and connected with the audience by sharing many personal anecdotes along with words of wisdom that he learned throughout his journey. His charisma, faith, sincerity and passion were very apparent.

I found his talk to be very inspiring and meaningful. This being the case I thought I’d share a recap on my blog so that others who were not able to attend could find value from it as well.

With that said…Here are the 11 sizzling success lessons I learned from John Rivers, the founder of 4 Rivers Smokehouse.

When John was younger he wanted to be a cook, but didn’t actually become one at a restaurant until he opened his own. However, throughout his life John invested significant time into learning the restaurant business. He held many positions in the restaurant industry including doorman, bar tender, bus boy, dishwasher, etc. By working in these various positions he was able to see many aspects of the restaurant industry. John took a break from the restaurant industry and worked his way up to become a CEO of a major healthcare company. All the while he never lost his passion for restaurants. When he traveled to new areas for healthcare meetings, or other business travel, he would have his personal assistance arrange times for him to visit BBQ spots in the area they were visiting. After visiting each BBQ spot he he would note what he liked and did not like about each. This gave John in depth knowledge about BBQ and helped him create a solid foundation for 4 Rivers. 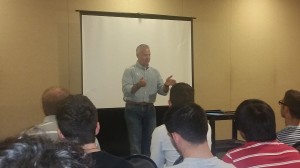 John shared a story with us about a time when he worked in a restaurant. John wanted to be a cook, but after the manager hired him he was assigned to washing dishes. John had a choice. He could be discouraged, or up-set, or make the most out of the situation. He told himself “If I cannot do something I am passionate about…I can inject passion into what I am doing.” He decided to create a small tiki hut around his assigned dishwashing area. He brought in a tape player and began playing upbeat music. More and more employees began engaging wish John and he indicated that the morale improved substantially. He then began to time himself to see how fast he could wash dishes – essentially creating a game, which causes his dishwashing experience to be more enjoyable.

What a great story!

John was able to change a situation he was not pleased with into a positive one by shifting his perception, thoughts, attitude, surroundings and actions. Consequently he had a better time working, positively influenced others and improved team productivity and morale.

One day, when John was a CEO of the major healthcare company, he found himself sharing his dissatisfaction about his job to a friend. John mentioned that throughout his management career he frequently coached his employees to do what they love, or find something else to do. Once John realized that he was no longer doing something he loved he knew that it was time to do something else. After he retired from the healthcare company he began focusing more on his dream cooking BBQ and sharing it with the world.

John indicated that business plans written in stone rarely are executed successfully. Many variables arise that cause entrepreneurs to adjust their plan to meet unforeseen circumstances or opportunities. This being the case he indicated that rather than focusing on the plan…it is much better to focus on the purpose. Plans can be beneficial, but be sure to hold your purpose close to you, listen to your gut and follow your heart.

One thing that I didn’t know about 4 Rivers is that their BBQ was initially never meant to be a business. John began cooking BBQ out of his garage as a fundraiser for those in need. He went on to start John’s Ministry and would donate his BBQ to help raise money for causes and distressed individuals.

After starting his business he had a very large following from all those he had touched and made a positive impression on over the years.

Today donations and giving back is still a cornerstone of their business and culture. This is clearly evident in their mission statement that appears on their corporate website:

To use our God-given gifts to support the local community, schools and charity organizations by building a business that distinguishes the 4 Rivers brand on the foundation of exceptional products, customer appreciation and uncompromised honesty, integrity and respect.

We hope you enjoy our products as much as our friends and family do. More importantly, we hope you consider joining us in support of the multitude of wonderful, important charitable organizations we support.

John indicated that they have donated to over 467 organizations. Rather than invest money in advertising this charitable giving produces substantial awareness and goodwill that helps fuel the continued growth of 4 Rivers.

When John decided to launch the first 4 Rivers restaurant in Winter Park everyone told him that opening a BBQ spot in that location was a bad idea. Nevertheless John followed his gut and continued. He mentioned that if he would have known all of the hardships he would have faced he likely would not have started it in the first place. He referenced a concept Steve Jobs shared and indicated that it is easy to connect the dots looking back, but difficult to connect them looking forward. Because of this it is important to trust your gut.

John trusted his gut even in the toughest of times and encouraged us to do the same.

This suggestion goes along with the previous one. When John decided to take the leap of faith and open the first 4 Rivers store in Winter Park, Fl he faced some difficult challenges. He initially budgeted $188k budget for first store, but the project went significantly over budget. After investing nearly $500k and having only a few months of funds left in their personal bank account the contractor John had hired went out of business. Yikes!!!

At the same time John was offered a big job as the CEO of a newly founded healthcare company that included a very large compensation package. John spoke with his wife and she supported whatever decision he made. Something inside John told him not to take the job and continue following his dream with faith.

John soon was connected with a contractor who helped him complete the construction of 4 Rivers. John was now in business!

By the way..The big healthcare company that offered John the CEO job soon went out of business.

This suggestion made by John falls very much in line with lean start up principles and business model canvas. Don’t throw a large amount of resources behind a project without testing it first. This may sound contradictory with the suggestion of following your gut, but there is a difference between being naive and being smart by testing the viability of your concept before investing heavily into it. It is best to invest a little, and learn a lot…then proceed accordingly.

John didn’t spend too much time talking about his product, but from personal experience…it speaks for itself! Their BBQ is the best I’ve tasted. 4 Rivers has extremely high quality food and that commitment to quality starts from the top. I remember the first 4 Rivers location had a line around the building. The lines were similar to those at an amusement park. John mentioned that they go through 15,000 lbs of Brisket per week per store. Roughly 1.7m lbs per year of delicious, yummy brisket. (Sorry if I offended any Vegetarians!) 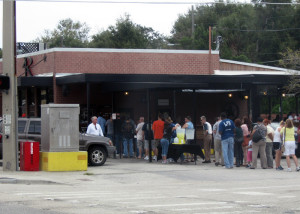 John mentioned “We celebrate mistakes at four rivers…we learn from them.” He explained that everyone makes mistakes, but it is essential to learn quickly and grow from those mistakes.

I enjoyed listening to John Rivers and hope that you found as much value from his success tips as I did. 4 Rivers was founded in 2009 and has quickly exploded into one of the fastest growing restaurants in Central Florida. They just signed a lease for their ninth location! I wish John and his team at 4 Rivers much continued success!