Super Bowl Commercials – The battle of the brands

It’s that time of the year again! Two teams are going to battle it out this Sunday to earn the right to be NFL Super Bowl champions. My team, the Pittsburgh Steelers, had a disappointing season and fell just short of making the playoffs. Truth be told…I don’t really care about the Seattle SeaHawks or the Denver Broncos, but I’ll still be watching the game.

Why do you ask?

Well, in addition to the fact that it is arguably the most popular sporting event of the year, which for many is reason enough, I will also be watching because of the Ads!

Super Bowl Sunday is the time for brands to strut their stuff just like the players on the field…and they spend a lot of money doing it! About $4 million per 30 second slot to be exact. These brands are advertising to battle for positioning in your mind and wallet…and it is always super entertaining!

The great thing about advertising on the Super Bowl for brands is that they not only get massive exposure during the game, but this exposure leads to a substantial amount of commercials being shared online as well.

Budweiser released their commercial “Puppy Love” two days ago and it already has nearly 25M views. I’ve added a video of Puppy Love later in this post. 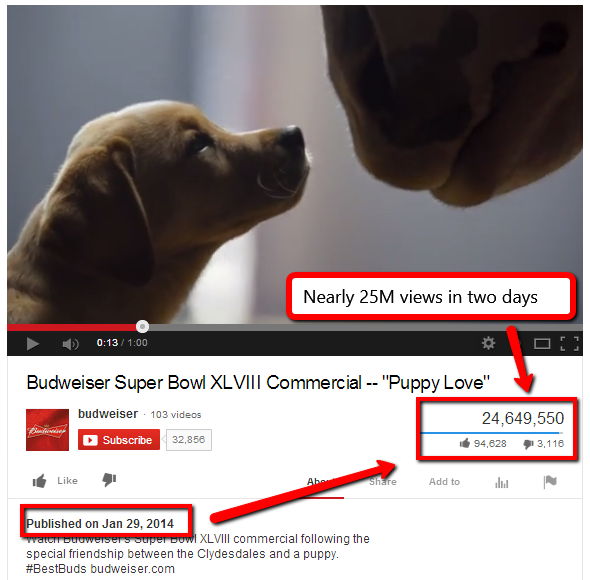 Now that is impressive! A great infographic on Super Bowl commercial sharing online was created by the team over at Unruly Media. I’ve added a copy below.

Last year I published some of my favorite super bowl commercials ever and some cool super bowl facts in case you wanted to check it out.  I’m hoping that I’ll be able to have some new favorites to add after the Super Bowl airs on Sunday!

Whether or not you’re rooting for Seattle or Denver….let’s all hope for some kick ass Super Bowl commercials! If they are anything like Puppy Love they won’t disappoint!