8 Success & Life Lessons You Can Learn From Harris Rosen

Earlier today I had the privilege to listen to Harris Rosen share his story and business lessons  at the Startup Studio Global Entrepreneurship Summit.

Harris Rosen has had a truly abundant, inspiring and impactful career. He shared that he currently has 8 hotels, 7000 rooms, and not a penny of debt. More importantly, he has a profit for a purpose mindset. He has committed himself to using the profits and success he has achieved to improving the lives of his employees, the local community and world. To date he has directly contributed $55M+ to charitable causes.

Here are the top 8 business lessons that I’ve learned from Harris Rosen. 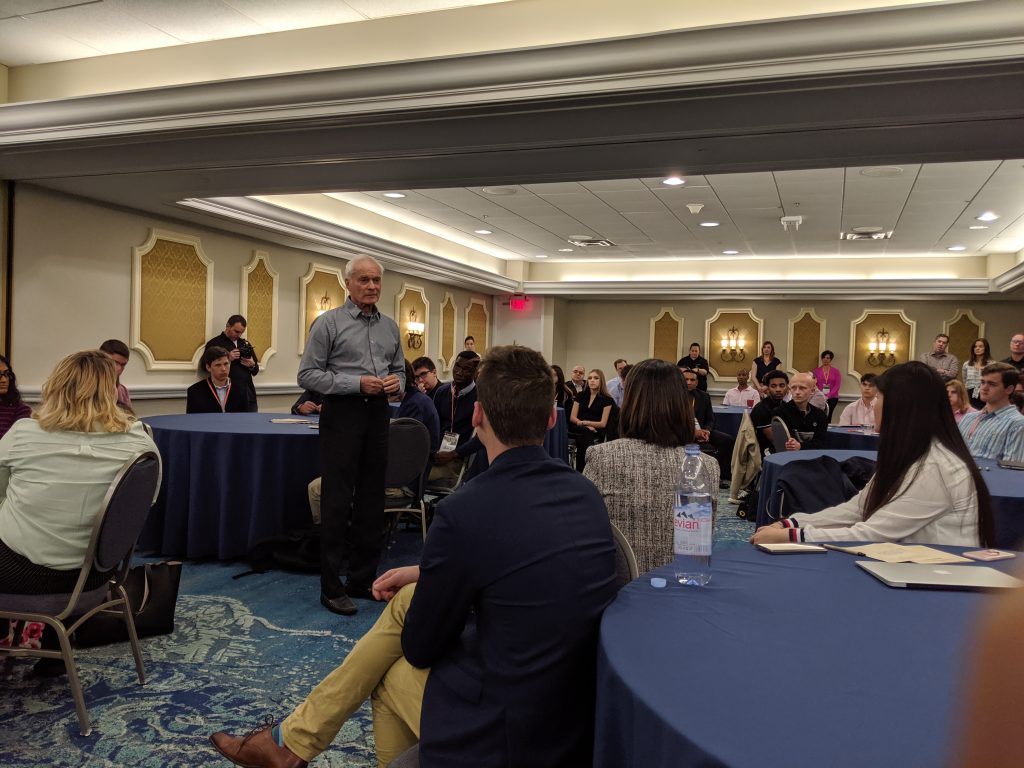 1. Sometimes failures put you in a better position for success

I found the backstory that Harris shared to be very inspiring. He grew up poor in Manhattan. After graduating from Cornell University he had ambitions of working at Disney and volunteered (worked without pay) as Whinny the Poo just to get into the door. He was eventually hired, but was told that he would never become a Disney Executive and was fired. He was depressed and disappointed. At this difficult time, he saw an opportunity. There was an Oil Embargo and consequently hotels were depressed and many were going under. He decided that it was a great time to buy a hotel.

2. Take risks to accomplish your dream

Harris found a bankrupt hotel on iDrive. He purchased the hotel for $20,000 cash and assumed a $2M+ mortgage. The $20,000 was nearly all he had to his name. Despite his family warning him to stay out of debt, Harris invested nearly all the cash that he saved and assumed a multi-million dollar mortgage. The mortgage took him roughly 15 years to pay off, but the investment paid off and gave Harris a great foundation for future success. It is important to note that Harris indicated that today in the position he is in his philosophy on debt has changed. If he cannot purchase or develop a new hotel or project with cash then he doesn’t do it.  Nevertheless, his startup story required some bold risks. These risks are often an essential part of  reaching great levels of success. Harris has demonstrated that and it is wonderful to see the levels of success he has reached since that first investment many years ago.

Rosen is an extremely hard worker. He advised the audience to work harder than humanly possible to accomplish your dream. He indicated that he never took a day off in 16 years. He also lived in the hotel and would often be found picking up cigarette butts on the property, which many owners would never be found doing.

In order to keep you motivated and working hard, especially in the challenging times, it is essential to love what you do. Harris shared this suggestion numerous times. Love what you do and it will show.

When Harris hit tough times early on after acquiring his first hotel he dug deep and wouldn’t give up. He hitch hiked to NY because he couldn’t afford a ticket. He cut deals with travel bookers to write the room rate they wanted to pay and indicated that his hotel would honor it for 2 years. These rates averaged $7-7.25 per night, but increased business and introduced people and potential partners with influence of the quality of his hotel.

6. You know when you’re doing something wrong. Don’t do it.

Harris Rosen is a man of integrity. Some business people sacrifice their morals to achieve success. Harris is not one of those people. He advised the audience to be honest and try to keep silly things to a minimum. He said “You know when you’re doing something wrong. Don’t do it.”

7. Treat others how you want to be treated

Harris indicated that he doesn’t have employees, he has family members. His hired staff becomes family and the culture of care and love that Harris built shows. He provides his staff the best healthcare in the world. He shared that the only healthcare expense that his team would ever pay is $750/year. He shared a story of an employee that had a pre-mature baby. After being in NICU the baby racked up a hospital bill of over $1M. The employee paid the first $750 and Harris paid off the $1M balance over the course of three years. He also pays the college tuition for employees after they have worked at his properties for a few years. He cares about his team and goes the extra mile for them. Consequently they go the extra mile for him.

8. When you become successful don’t sit on your toosh.

Harris explained that wealthy and successful people have certain responsibilities. Making a true difference in the world and our local communities is up to the private sector. Not the government. He mentioned that when you become successful, don’t sit on your toosh. Do good things. God will appreciate it. Harris has done immense good throughout his career. He recently asked his accountant to calculate the charitable giving that he has done over his career – it amounted to over $55M. Recently his investment in Tangelo Park has led to graduation rates skyrocketing and crime decreasing. Harris created a system for free-day care for Tangelo Park families. He also covers the tuition to Florida public Universities (including room and board) for all Tangelo Park seniors. Harris also developed the Rosen School of Hospitality Management at UCF. This hospitality program is the second best in the country behind Rosen’s alma mater Cornell (by a very slim margin).What amazing, generous and meaningful gifts he is providing! Harris has committed to spreading this spirit to other wealthy people across America. He indicated that they can change America one under-privileged community at a time.

Harris Rosen is an extremely inspiring man and a fantastic human being. In a world where many say that the rich should pay their fair share, Harris is a shining example of the good that good people that amass wealth can do in the world and their local community.