I almost always stay away from contributing my thoughts on racial topics, but I can’t stay silent anymore. I may offend some people who read this, but oh well. Not that it gives me a pass, but I am half black and half white so I am not coming from a bias racial perspective. 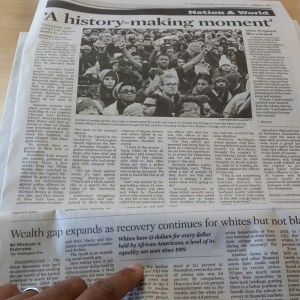 The Orlando Sentinel published two articles on the same page in today’s paper. The first discussed a history making movement of thousands, primarily African Americans, banning together to rally across many US cities to march against police brutality that has claimed the lives of black men.

On that same page…an article about the wealth gap and the fact that the economic recovery is improving for whites, but not blacks with stats to prove it. It indicates that the average white person has $13 for every $1 held by a black person.

Crime, poverty, lack of high paying jobs and poor education are much more common in depressed economic communities regardless of race.

When police officers are dealing with people from depressed economic areas they will be more on guard, fearful and on edge. Society, the media and likely their experiences in these areas have reinforced that. (Excessive force and brutality is not ok, but will likely be more common when someone has a “perceived justification” for that force. Even if there is no true justification for it.)

Based on the stats of the bottom article, African Americans are far more economically depressed than other races.

Many of these issues (crime in black communities, poor education, charged police encounters, wealth gap, etc.) are symptoms of a much bigger problem. Economic impoverishment.

The energy and time spent by so many marching could and should be spent on creating value and improving the economic circumstances and environment. That will have a much greater impact than emotional releases with no true outcome.

Most who meet me don’t know I am half white. They just see African American. I have experienced racial descrimination, but make a conscious decision that the person expressing it has the problem not me. It may at times make things a bit harder, but I wont allow it to hold me back. I have been able to grow a company organically to over $1M in sales with no investment or loans. It is possible.

There will always be people across any profession or community with integrity and others who lack it. Each will act as such.

A much greater improvement will manifest if more people focus investing their time into learning, growing and seeking to truly add economic value rather than coordinated efforts driven by emotion addressing a system bigger than they can influence in that way.